'In Care, In School’ was a project jointly led in 2011 and 2012 by Bath Spa University (BSU) and Bath and North East Somerset Council (B&NES). Partners included the PSHE Association, the Who Cares? Trust (now ‘Become’) and most important the B&NES In Care Council. Its aim was to empower young people in care, and care leavers to tell schools and other students how they felt, and the barriers which they faced. As a matter of principle the young people decided on the direction and details of the project at every stage.

The project came from a conversation between Michael Gorman, the then newly-appointed virtual headteacher for B&NES and the In Care Council. The young people told him that schools and peers ‘don’t understand us and they treat us as different - we want to tell them the way it is’. After much discussion the young people decided to produce a series of brief scenarios for class discussion, based on their own experiences in school. At an early stage they decided that they did not wish to appear on camera, but to use professional actors. With grants from BSU and B&NES the young people commissioned a film company, worked with a professional script writer, helped audition actors and even directed the filming. Ten scenarios were produced, five each for primary and secondary aged children. Once the films had been completed a group of teachers developed lesson plans, which again were reviewed by the young people before being published.

The materials were piloted in a primary, a secondary and a special school. 64 BSU primary and secondary PGCE students also volunteered to pilot them as part of their school placements. Again, members of the In Care Council helped to brief the students and took part in feedback sessions with teachers. The materials were used in contexts varying from early years to an entire one-term Year 8 tutorial programme. The young people were also invited to exhibit their work at the national 2012 NUT Conference. 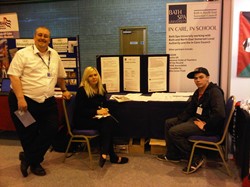 Naina and Kelvin at the NUT Conference, with Dave Biddleston, B&NES NUT Secretary

Feedback from all of these sources was used to refine the support materials, although not the core scenarios, prior to publication. There was a strong demand for teachers for further support materials and seven care leavers volunteered to participate in a further set of films outlining their experience of care, post 16 planning and later careers. These were included in the pack, with a training handbook for adults.

The young people present their scenarios to the Minister for Children, October 2012

The materials were distributed to all B&NES schools, and formally launched at the House of Lords in October 2012 by the then Children’s Minister, Edward Timpson, who had supported the project as a backbench MP. In November that year the scheme was shortlisted for the CYP Now National Awards. 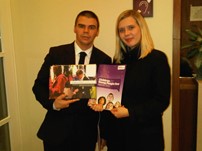 Naina and Kelvin at the Children and Young People Now Awards, November 2012

Since 2012, In Care, In School has featured in a number of publications about the education of children in care, most notably Sonia Jackson’s ‘Pathways through education for young people in care’ (2013) and Claire Cameron, Graham Connelly and Sonia Jackson’s ‘Educating children and young people in care’ (2015). The materials have been widely used across the country, in a number of ways. Discussions with schools as to how best to respond to the issues raised were an important factor in the development of the original BSU/B&NES attachment aware schools programme, and the eventual creation of ARC.

Over 1300 copies of the pack, which was originally sold as a DVD, were distributed, but since 2016 it has been openly available via the Internet. Following the de-commissioning of our original website we are delighted that ARC has agreed to host these materials, which we feel are as relevant today as when they were originally produced.

‘We talked about these ideas for ages at the In Care Council, and now here I am talking to you guys. It’s unbelievable..
‘Even though we created these scenarios I still find it hard to watch them – it’s my life we’re talking about.’ (Kelvin, talking to Bath Spa University students in 2012)

Take a look at our video collection of various scenarios

When I was at school I found it very difficult to make new friends and fit in. This was due to being in foster care and moving schools a lot. When starting a new school I always had to make the teachers aware I was in foster care...

In Care, In Schools

‘In Care, In School’ was a project jointly led in 2011 and 2012 by Bath Spa University (BSU) and Bath and North East Somerset Council (B&NES). Partners included the PSHE Association, the Who Cares? Trust (now ‘Become’) and most important the B&NES In Care Council.